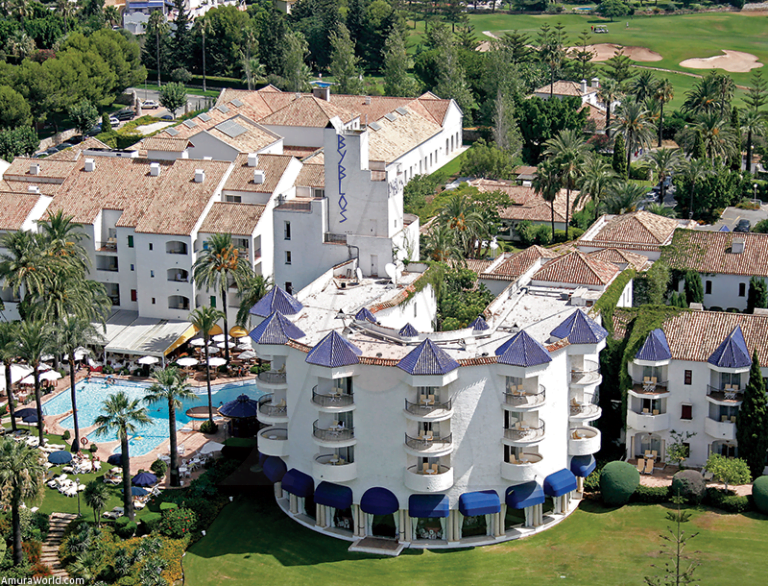 The historic Byblos Hotel in Mijas will reopen its doors next June 2022 as La Zambra Hotel, a new large luxury establishment on the Costa del Sol that will be part of The Unbound Collection by Hyatt.

Located on the Costa del Sol, between two 18-hole golf courses in the Mijas Golf urbanization, this hotel is emerging as “the perfect destination for clients seeking peace, tranquility, privacy and relaxed luxury”.

Opened in 1984, this hotel became the favorite accommodation of the elite and royalty of the late 20th century under the mythical Byblos label, with its famous white facade and blue towers. During the 80s and 90s, it welcomed characters of the stature of Princess Diana of Wales or international stars such as Julio Iglesias or the Rolling Stones.

An icon of tourism on the Costa del Sol that after years closed will reopen its doors completely renovated, in a great updating project directed by the Esteva i Esteva studio.

La Zambra will have 196 rooms of different categories (Double, Standard, Deluxe Golf View, Deluxe Garden View, Junior Suite, Standard Suite and Premium Suite, as well as a 125-square-meter Grand Suite), all of them with a terrace and views of the field. golf or the mountains.

The hotel offers access to the two golf courses and will include three swimming pools, two tennis courts and two paddle courts, a gym, a yoga and Pilates room, as well as a health center (‘wellness’) with a water area and Jacuzzi, Turkish bath, sauna and hammam. It will also house ten treatment rooms.

The establishment’s facilities are completed with a disco, a space for multidisciplinary events and a children’s area. In addition, its gastronomic offer in La Zambra will be flexible and personalized according to the needs and tastes of the client; in fact, it will include, at sunset, the rotunda bar, where you will remember the golden years of the Costa del Sol in the 90s.

Marugal has eleven hotels in its portfolio and they are closely linked to the destination where they are located; while Intriva is an investment company that manages capital on behalf of institutional investors. For its part, Hyatt Hotels, as of June 30 this year, includes more than 1,000 hotels and all-inclusive properties in 68 countries on six continents and, within, it has the Unbound Collection, “a careful selection of stories, rather than a compilation of independent and unique hotels “.

You Gotta Watch This