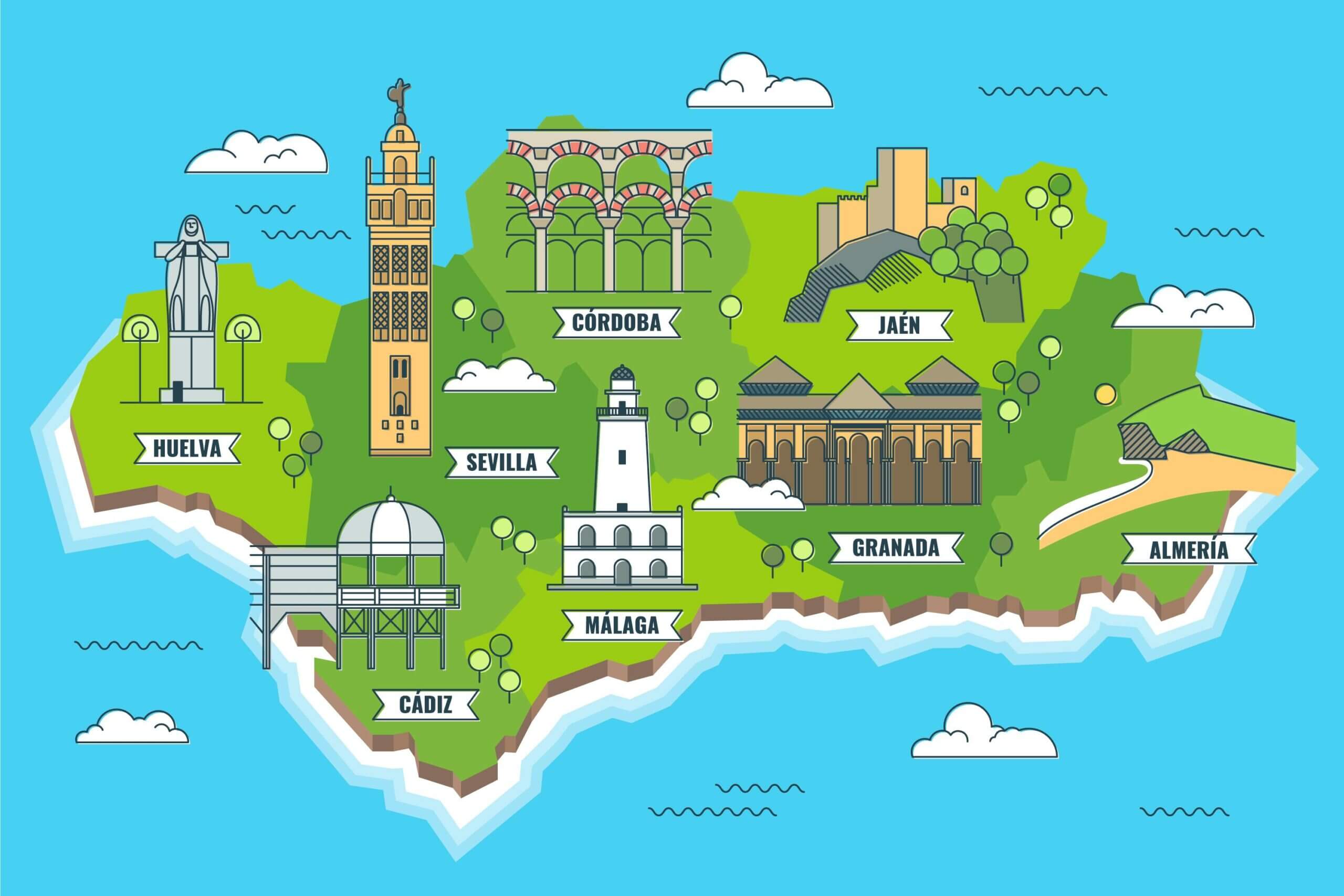 Do you know the 8 provinces of Andalucía

In Andalucia you also find many natural park. througout the regions.

In this blog post, we’ll give you a quick overview of each of the 8 provinces in Andalucia.

Huelva is the westernmost province in Andalucía. It is known for its stunning coastline, which includes the Costa de la Luz (Coast of Light). The province also has a rich history; it was first settled by the Phoenicians in 1100 BCE.

Córdoba was once the capital of Moorish Spain. Its most iconic landmarks are the Mezquita (Mosque-Cathedral of Córdoba), a UNESCO World Heritage Site, and the Alcázar de los Reyes Cristianos (Castle of the Christian Kings).

Almería is located in southeastern Andalucía. It is a predominantly desert province; nearly one third of its surface area is covered by the Tabernas Desert. The province’s capital city, also called Almería, is home to the Alcazaba, a Moorish fortification that dates back to 1089 CE.

Sevilla is perhaps the best-known province in Andalucía. It is home to Spain’s third largest city, also called Sevilla. The province’s top attractions include the Cathedral of Saint Mary of the See (a UNESCO World Heritage Site), Plaza de España, and Casa de Pilatos.

Cádiz is another coastal province in Andalucía. Its capital city, also called Cádiz, is one of Spain’s oldest continuously inhabited cities; it was founded by the Phoenicians in 1104 BCE. Other popular tourist destinations in Cádiz include Playa de la Victoria and Playa de Santa María del Mar.

Jaén is located in northeastern Andalucía. Its capital city is also called Jaén. The province is known for its olive oil production; Jaén produces more olive oil than any other place in the world! Other popular tourist attractions in Jaén include Santa Catalina Castle and Parador de Baeza (a luxury hotel located inside a converted palace).

Granada is probably best known for its world-famous Alhambra Palace (a UNESCO World Heritage Site). Located in Granada’s city center, the palace was built during the height of Moorish rule in Spain and is considered one of the finest examples of Islamic architecture in existence. Other popular tourist destinations in Granada include Sierra Nevada National Park and Generalife Gardens.

Costa del sol and Malaga are well knowen in europe and are one of the most visited provinces of andalucia. The coast of Costa del sol is very famous for its fine beaches.

As you can see, there’s a lot to explore in Andalucía! Whether you’re interested in history, culture, or just soaking up some sun on a beautiful beach, there’s sure to be a province here that appeals to you.